Samson’s conception story may be read subversively as the result of a union between a divine being and a mortal woman, making Samson a demi-god with superhuman characteristics. At the same time, the text keeps open the more mundane possibility that his father is Manoah and his powers are simply a gift from God. 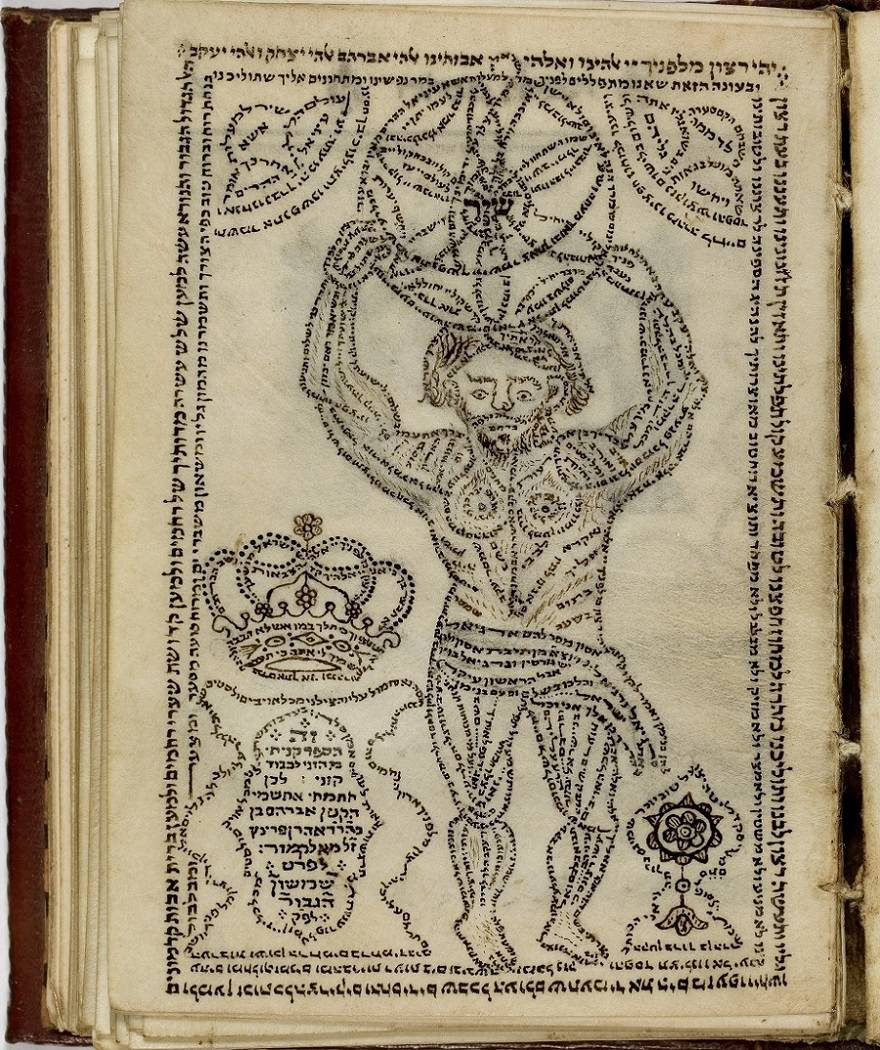 Samson depicted as Atlas with the earth on his shoulders. From Sefirat HaOmer (plus Mincha-Maariv) Siddur, Baruch Ben Shemaria (Amsterdam, 1795) Braginsky Collection, e-codices

Judges describes Samson as a man with superhuman attributes. At one point, he tears a full grown lion in half with his bare hands (Judg 14:5–6) and at another he kills three thousand Philistine warriors with the jawbone of a donkey (Judg 15:14–16). In a later escapade, Samson spends the night with a prostitute in Gaza while Philitine warriors are hiding on the other side of the city wall to kill him. The text describes how he escapes:

In addition to his great strength, the text here implies, though it does not state definitively, that Samson is a giant: his arms spanned at least as wide as a large city gate, allowing him to tear the entire structure off its gateposts and carry it on his shoulders. Interpreting the verse, a baraita in the Babylonian Talmud makes this point explicitly (b. Sotah 10a):

This giant size is implied again in Samson’s final act of suicide. After he is captured and blinded, the Philistines take him out of his prison in Gaza into the Dagon Temple there, in order to poke fun at him during a celebration. Samson asks a lad to lead him to the two pillars that support the structure, which would generally be too far apart for a regular sized person to touch both. This gives Samson an idea:

According to this, Samson’s arm-span was great enough to allow him to lean on, possibly even “grasp” (וילפת can be interpreted both ways) the two supportive pillars of an enormous temple simultaneously. In fact, at least one fifth-century Galilean mosaic in Huqoq unmistakably depicts him as a giant.[1] 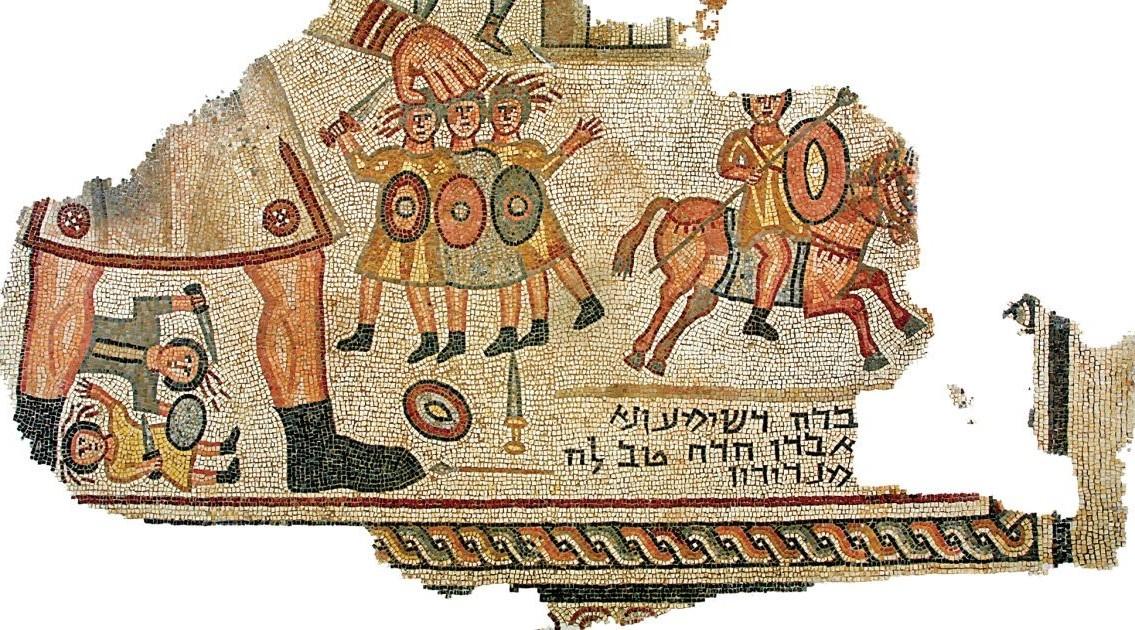 A Minor Solar Deity
Samson’s name, Shimshon, recalls the common noun used for “sun,” (šemeš), as well as the proper noun that serves as the name of a solar deity in several Semitic languages, such as the Akkadian sun god Šamaš. As the ending sound “ōn” is a diminutive, his name means something like “little sun” or, if he is meant to be a demigod, “son of the sun.”[2]

A faint but unmistakable echo of this name-link is found in the Babylonian Talmud (b. Sot.10a):

This evidence has suggested to many scholars that underlying the biblical Samson story is a myth about a solar deity impregnating a mortal woman and giving birth to a demigod.[3] In fact, hints of Samson’s semi-divine origin can be seen in the opening story about his conception (Judg 13), which insinuates the possibility of impregnation by a divine male figure.

A Visit from a Divine Being

The annunciation narrative begins by telling us that Manoah’s wife was barren and without child (Judg 13:2), and then moves on to the angel’s visit:

Here we first encounter the enigmatic angel’s suggestive grammatical prowess: the weqatalform, וְהָרִית, refers to a future conception, either imminent or distant. In verse 4, the angel instructs the woman to refrain from consuming certain substances that would conflict with the in utero naziritehood of her son:

This phrasing implies that her pregnancy is immanent and, in the very next verse, the angel refers once again to her pregnancy, this time employing not the so-called “converted perfect” tense as in verse 3, but a participle, הִנָּךְ הָרָה, which often refers to the present,[4] as well as the word.הנה

Admittedly, such participles used in this way can denote imminent or near future events (e.g., Exod 10:4), but it is notable that the description of her status shifted in just two verses, from והרית  (“you will become pregnant” v. 3) to הנך הרה (“you are pregnant” v. 5). Thus, a number of scholars have argued that the text means to imply that she got pregnant in the interim, leaving little room for the imagination as to what we are to envision having happened.[5]

One rabbinic tradition, acutely sensitive to the shift in the angel’s grammar but certainly not prepared to suggest that the angel was Samson’s biological father, offers an ingenious solution, simultaneously retaining the elements of divine impregnation and Manoah’s biological fatherhood (Numbers Rabbah, Nasso, 10:5):

Clearly, the suggestion here is not what the text implies, but it encapsulates the question that the ambiguity posed by the grammar: whose son is Samson?

It is easy to imagine that Manoah would be at least as troubled as some modern readers of the Samson narrative about his son’s paternity. Like the readers, he does not know for sure what happened in the field when his wife met the “man of God” other than what she tells him:

As noted by Zakovitch and others, the phrase “came to me” בא אלי, can also be translated as “came unto me,” a common euphemism for intercourse.[7]

To Manoah’s great chagrin, only his wife was visited by the holy man—it takes Manoah a long time to figure out he is a divine being despite his wife’s description of him. Manoah has no part in the preparatory acts for the miraculous birth, as the angel’s instructions are only for his wife.[8]

Note the triple use of the plural, emphasizing how Manoah is trying to include himself in the message. The angel indeed comes a second time, but once again only to his wife, who runs to fetch her husband. Manoah, as if unable to bring himself to repeat in the presence of the man/angel what he had said when he prayed to God in private, simply says,

The angel’s response is a seemingly straightforward reiteration of what he had said to the woman previously, and the angel even says as much (vv. 13–14). A broad consensus of ancient and modern scholars understands the angel as basically ignoring Manoah’s request to be included in the instructions.[9] And yet, this is not the whole story, since the angel uses different verbal patterns in his instructions this time around.

Identical Verb Forms with Different Meanings
In Biblical Hebrew, the forms of the second person masculine singular (2ms) and third person feminine singular (3fs) of the yiqtol (performative) verb coalesce: morphologically, they are indistinguishable. This allows for ample opportunity for ambiguity and wordplay based on person:

Each and every one of the five primary verbs[10] in the angel’s injunctions to Manoah during the angel’s second visit can read in two different ways. Morphologically, each of these could be interpreted as a 2ms, thus referring to Manoah, who is now being enjoined to keep strict food taboos in preparation for his son’s birth (which we imagine might please Manoah, indicating that he has an important role in the birth of their child) or as 3fs, referring to Manoah’s wife alone keeping the food-taboos (which might be less welcome news to Manoah, indicating that he has no not part in this miraculous birth).

We can imagine the poor husband eagerly following the words of the angel, sentence after sentence, verb after verb, anxiously expecting a disambiguating verb, which never comes. Not a single verb has helped Manoah understand his own position. Of course, we don’t know what Manoah’s emotional response to the angel’s instructions was, and it is possible to imagine that Manoah chose to understand the list of ambiguous verbs in his favor. Regardless, the “nail-biting” reading should affect readers, even if not Manoah himself.

Thus, the angel, who is characteristically enigmatic, leaves the characters guessing, just as the omniscient narrator leaves us readers guessing—we never find out for sure whether Manoah was to observe the food-avoidances, i.e., whether he can know for certain that he has a part in the biological constitution of this supernatural son.

The lack of disambiguation is a key feature of the story of Samson. Just as we do not know whether the angel impregnated the woman,[11] so too do we not know what Manoah’s role is to be. Why does the narrative remain ambiguous?

It could be that the author felt uneasy stating explicitly that Samson is a demigod. Alternatively, he could be asserting a hierarchy of knowledge—namely, presenting the unnamed mother as privy to precious knowledge that is known only to her and to the divine being, but not to any of the other characters or to the readers.[12] The only one who really knows for certain who Samson’s father was—aside from the divine being—is his mother[13]

The use of ambiguous language is particularly apt for a riddle-like story (and a character particularly drawn to riddles, see Judges 14:14). The playfulness of the biblical text suggests that the ambiguity is central. This tendency toward grammatical enigma in the story may serve as a hermeneutic guide, urging us to read with an eye toward the subversive and hidden meanings within the text.

Dr. Naphtali Meshel  is a senior lecturer in Hebrew University’s Departments of Bible and Comparative Religion. He holds a Ph.D. from the Hebrew University, and was previously an Assistant Professor at Princeton University. Meshel did post-doctoral studies in India, studying Sanskrit literature on ritual. He is the author of  The “Grammar” of Sacrifice: A Generativist Study of the Israelite Sacrificial System (Oxford).
06/14/2019

[3] This claim has been most eloquently made in recent years by Yair Zakovitch in The Life of Samson (Jerusalem: Magness Press, 1982).

[6] Incidentally, the conventions assumed by the author suggest that Nazirites were to refrain not only from corpse-impurity (as in Num 6), but also from other impurities that can be transmitted to food (e.g., from carcasses of certain animals, including lions and donkeys).

[8] One would imagine that Manoah would be reassured if he were told that he, too, is to refrain from eating impure foods, or drinking alcoholic beverages, from this point until the birth of the young boy, either because Ms. Manoah is not yet pregnant, or because Manoah believed, as many did in antiquity, that the husband’s contribution to the formation of the embryo is accumulative, continuing, through sexual relations, throughout pregnancy.

[10]  This does not include the two 1cs verbs which are in the subordinate clauses.

[11] Unlike Gen 6, which states unambiguously that demigods were born of unions between divine male creatures and female earthlings.

[12] See, for example, Yairah Amit, “‘Manoah Promptly Followed His Wife’ (Judges 13:11): On the Place of the Woman in the Birth Narratives,” in A Feminist Companion to Judges, ed. Athalia Brenner-Idan (Sheffield: Sheffield Academic Press, 1993), 146–156 and J. Cheryl Exum, “Mother of Samson,” in Women in Scripture: A Dictionary of Named and Unnamed Women in the Hebrew Bible, the Apocryphal/Dueterocanoncial Books, and the New Testament, ed. Carol Meyers et. al. (Grand Rapids: Houghton Mifflin Company, 2000), 245–246.

[13] Lest one think that this feminist reading of the Samson narrative is the product of modernity, the Babylonian Talmud (Berachot 61a) and the late medieval commentator Abravanel (Judg 13) make similar claims—that Manoah’s wife is worthy of divine revelation and is the one guiding Manoah.